The annual presentation of new releases from Domaine de la Romanée-Conti in early March was the last tasting I attended before lockdown. Initially I thought I would publish this article as a bookend, when things returned to normal. Back then, I could have never imagined where we would be today. After reading Neal Martin’s article Complex, Not Complicated: 2017 DRC in Bottle chronicling the London edition, I decided to shamelessly rip off his format. So, here you have my version… 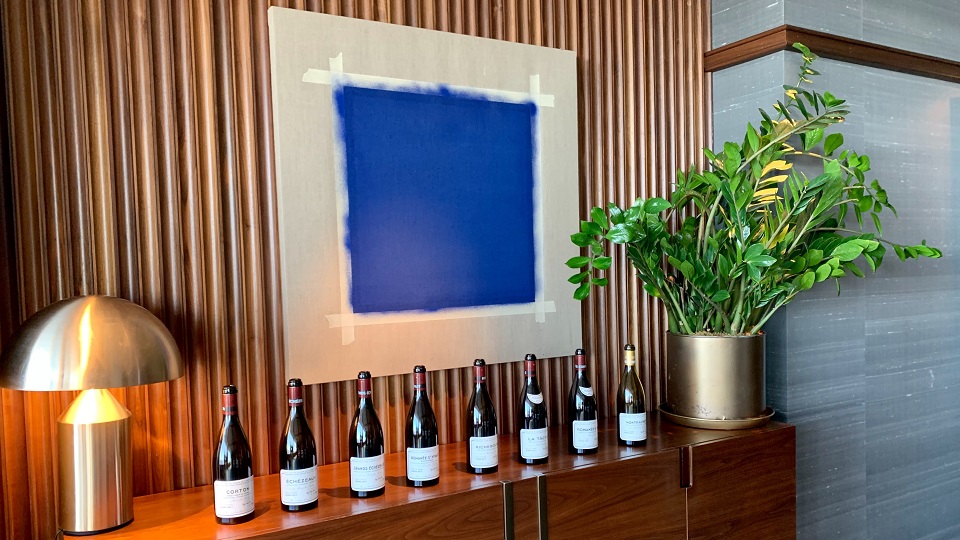 The complete lineup of 2017s from Domaine de la Romanée-Conti.

6:00am: It’s Thursday March 5th. The day of the Domaine de la Romanée-Conti tasting for the trade in New York. Aubert and Bertrand de Villaine are in town to show the new vintage, 2017, in a small sit-down tasting hosted by long-time importer Wilson Daniels. I always look forward to this day. Of course, it’s a great opportunity to taste the wines in a calm setting, but just as much I enjoy seeing so many wine professionals I rarely get to spend time with outside their restaurants, shops and offices. This year’s event is smaller than in past, though, as it is focused just on the press…more on that later.

I wake up very early, still jet lagged from last week’s ski holiday with the kids. Little do I know that will be my last trip to Europe for what is now nearly five months and counting. Before I get to DRC, I’ve got an early appointment with the painting crew, one of the last steps in getting my house back in order following severe water damage a few months ago. It’s been an arduous process to say the least. Breakfast is my typical huge pot of Illy espresso done on an old Italian stove top moka, cereal with fruit and a hard-boiled egg.

7:00am: A little early morning guitar practice. I always try to do at least one hour of playing in the morning, as I find it really clears my mind and is relaxing to me. I am particularly attached to my new Rust guitar right now. There is nothing like an instrument that has been built just for you. Time to get to work, though.

8:30am: The painters are late, but I have allowed extra time, so everything should be OK.

9:00am: Maybe I spoke too soon. The painters are now very late, but that’s not the worst of it. I might be late for the DRC tasting. Let me tell you something: the phrases ‘DRC’ and ‘late’ are not meant to be uttered in the same sentence.

9:15am: White Dove, Simply White, Snowfall White, Satin, Flat…The infinite intricacies of wine and music I can understand, no problem. Choosing paint colors? That gives me severe anxiety. I mean, what if you make a glaring mistake?

9:45am: Uber is freaking out. It does not like Danny Meyer’s Manhatta, the location of the DRC tasting. Note to restaurateurs – naming your restaurant something that can be confused with many other locations and businesses is not a great idea. Uber and Manhatta are not getting along today. Why have I never downloaded Lyft? I frantically call James in the office. James is one of the Vinous founders, and the person who fixes everything. A Lyft is on the way. I feel my heart rate coming back down to normal. Maybe I will only be acceptably late.

10:00am: Craig, my driver, has decided that today’s soundtrack is going to be Queensrÿche, blasted at maximum volume. Suddenly the day is looking better. Maybe it’s not going to be so bad after all. My first semester at Berklee, the guys in the dorm room next door played “Operation: Mindcrime” nonstop at all hours of the day, and that music grew on me. I ask Craig to get us down to Manhattan and Manhatta pronto. He obliges, and I am temporarily distracted by “Empire,” “Silent Lucidity” and “I Don’t Believe in Love.”

10:15am: I am thinking…maybe I can just sneak in and blend in at the back of the room. Then I remember that this year, the domaine has decided to do smaller tastings, and this one is just for a dozen or so journalists. So, there goes that idea. I have never really gotten comfortable being considered part of the ‘media’ or ‘press.’ I didn’t study writing or wine tasting, so I always feel out of place in a group of real writers. I started writing about wine as a passion; it is still a passion, and over time, it simply became my profession. 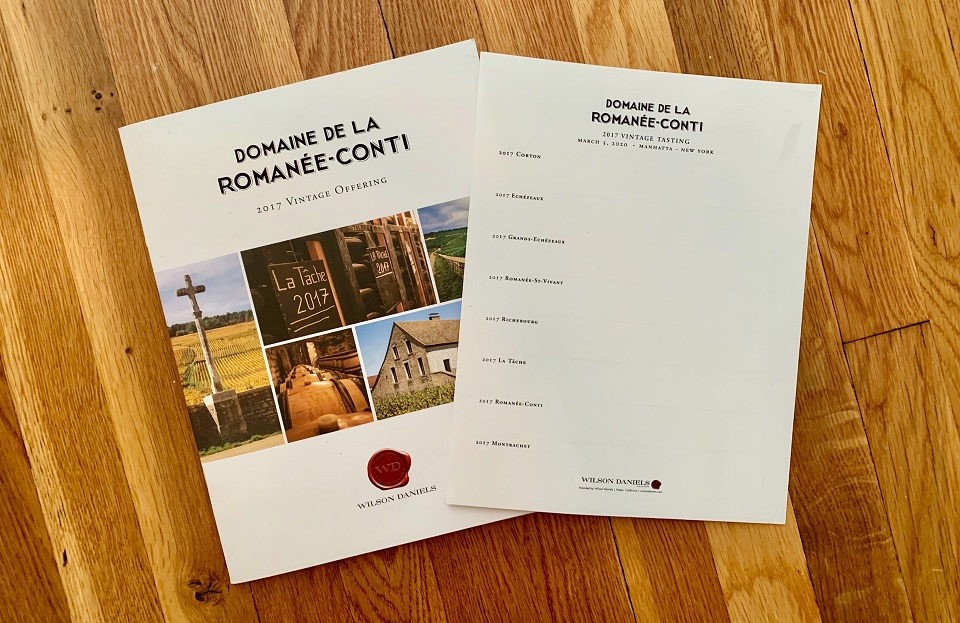 Don’t worry I did take notes, but I could not bring myself to write on the official tasting booklet.

10:30am: The DRC tasting is about to start, and I will be at least 30 minutes late. Not good. In Burgundy, 15 minutes is about the maximum you can be late without annoying people, but even so, I am usually right on time. I let Alex at Wilson Daniels know I am delayed, and that is comforting, for about a second. I am hoping…let me rephrase that…I am praying that the 30-minute Champagne welcome is part of this year’s program, even in the smaller format.

11:00am: Finally. I arrive at Manhatta. “You must be Antonio Galloni,” says the woman at check in. Ugh. You don’t want to be that person.

11:01am: The elevator ride up 60 floors feels like an eternity. I find the private room, and still harbor a hope I can sneak in unnoticed. Sadly, not a chance. I arrive just as everyone is being seated and take my place. Well…it could have been much worse. Thankfully, they did have the Champagne aperitif, so I just made it. It’s the beginning of COVID-19, and there are the first nervous, uneasy comments about the virus. Elbow bumps have replaced the customary handshakes as greetings. If I have kept anyone waiting I apologize, but it looks like everyone is enjoying the moment. And what’s not to enjoy? We are about to taste the full range of 2017s along with some library wines.

11:02am: With great punctuality, Aubert de Villaine presents the 2017s. He is, as always, quiet, introspective and so thoughtful. More than that, growers of his generation, of which there are few, still remember when selling wine was hard. It was not that long ago. And so, there is also a simplicity to Aubert that is admirable. 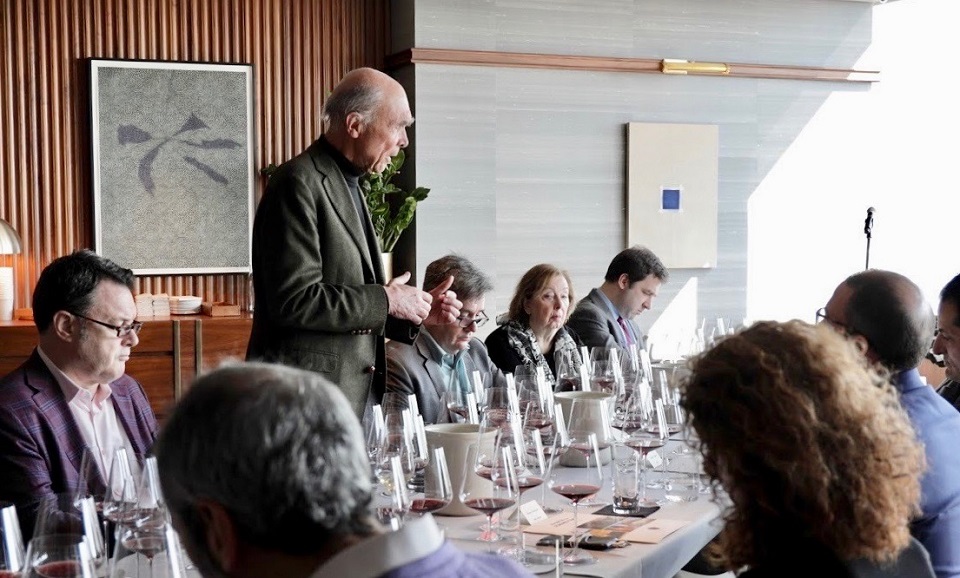 “The growing season was marked by several key episodes,” Aubert de Villaine explains. “For the first time in a number of years, we had a cold and rainy January. We had much warmer and drier weather in the spring, which led to early bud break. Frost created some anxiety, but we escaped without damage, unlike 2016. Warm weather returned in May, and that led to a very fast and easy flowering. At that point, we understood we had the potential for a healthy crop. June was very hot, which had the effect of toughening the skins. That proved to be a positive in helping the grapes deal with storms later in June and July. The last phase of ripening, in August, occurred at an accelerated pace. By the second half of August we had good sugar ripeness, but we chose to wait as long as we could to obtain phenolic ripeness. We were helped by rain at the end of the month. We began picking on September 4 in Corton, as is our custom, and wrapped up on the 15th with the last sections of Echézeaux. On average, we vinified the 2017s with 90% whole clusters, as the stems were ripe, but some wines, like the Romanée-Conti, were done with 100% whole clusters.” 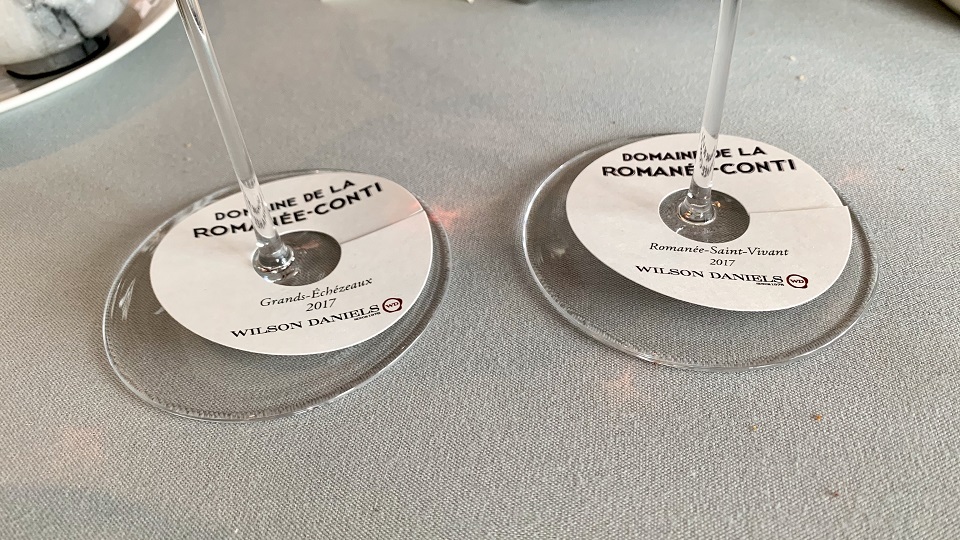 Each glass is meticulously labeled.

11:20am: “You and I are the world’s loudest typers,” Rocco Lombardo, Wilson-Daniels’ President, whispers in my ear. Translation: “Could you please stop making so much noise.” I get it.

11:33am: “For those of you who have not been to the domaine, I would like to remind you that we do not spit the Romanée-Conti,” Aubert de Villaine says softly. No argument from me. After the morning’s travails, I don’t think I spit much of anything.

And what about the wines? Well, 2017 is an intriguing vintage, to say the least. At the moment, the 2017s are, as a group, reticent and hard to read. It is a year of mid-weight wines that are less expressive and less purely seductive than they often are at this stage. I get a sense there is more to them than they show at the moment. That’s part of the mystique of Burgundy. To be sure, this is a fabulous opportunity to examine the style and personality of each cru through the lens of a specific vintage. All of the wines are present, unlike 2016, when frost decimated yields for the Echézeaux and Grands-Echézeaux to the degree that those wines were bottled in such small quantities the domaine has not offered them and devastated Montrachet, leading a group of estates to blend all their fruit together for a single wine. No, this year we have them all. 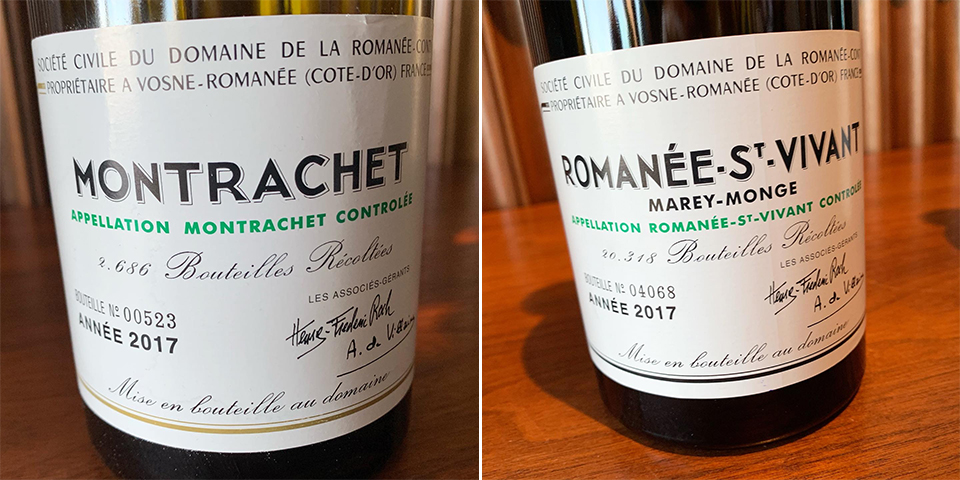 The Montrachet and Romanée St. Vivant are among the standouts in this lineup of 2017s.

One of the biggest critiques of critics is that we rate wines according to their perceived level of quality. Nowhere in the world is the concept of hierarchy so ingrained in the culture as it is in Burgundy. Wines are presented according to their presumed ranking, so it can’t be too surprising when scores also line up in that order. I mean, at DRC, it is Romanée-Conti, then La Tâche and then down the line, right? Well, no, not exactly. All of the wines are truly singular, but if I had to choose a favorite among the 2017s it is the Romanée St. Vivant, which is truly exceptional. Maybe in ten years’ time things will look differently. And then there is the Montrachet, which is fabulous. I also think the Grands Echézeaux is especially fine. And there you have it.

12:00pm: The formal tasting of 2017s wraps up perfectly on time. Hopefully I will get invited back next year…

See the Wines in the Order Tasted 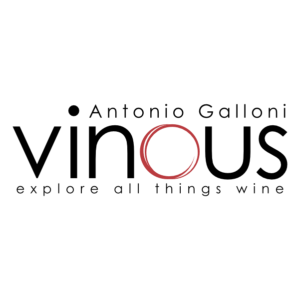 2017 Domaine de la Romanée-Conti: A Day’s Work
Are you sure you want to clear all?
Step 1